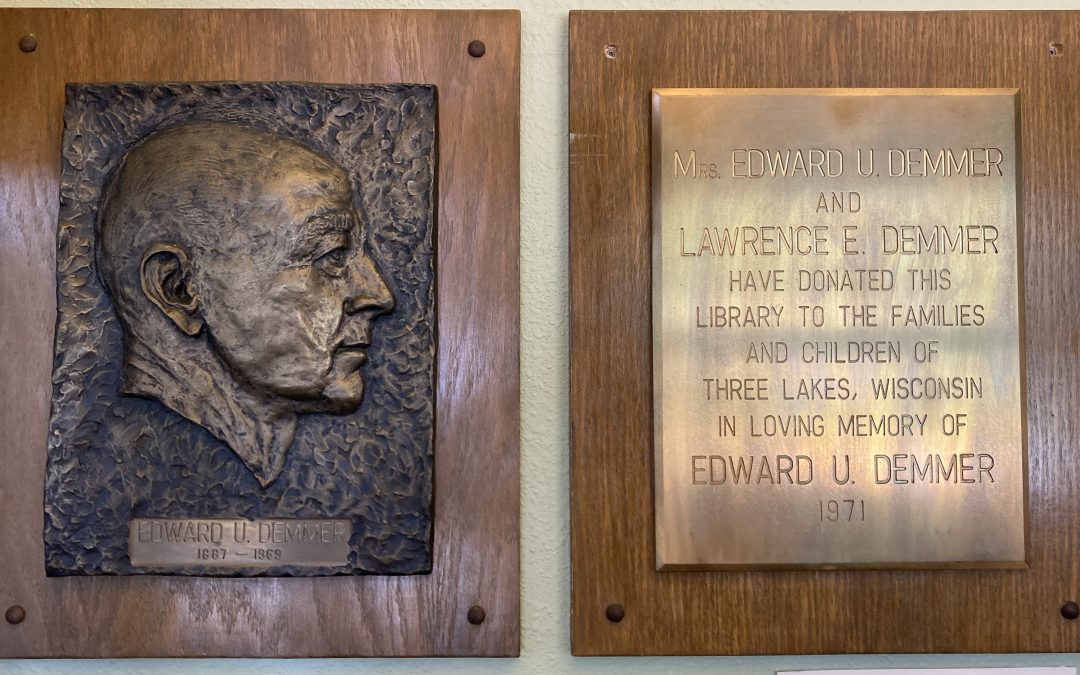 On Sunday, August 22, the library in Three Lakes is celebrating its 50th anniversary of becoming the Edward U. Demmer Library. To honor the milestone, visitors can make their own button at the library during the following week and all are invited to an open house on Wednesday, August 25, 3 PM – 5 PM to visit the remodeled building.

On August 22, 1971, the new library building was dedicated in Three Lakes, beginning the era of the Edward U. Demmer Memorial Library.

The first library in Three Lakes, the Free Library, was established as a project of the newly-formed Three Lakes Women’s Club with the first books listed in the accession book in 1949. The Free Library spent the next decade without a permanent home, wandering from the first grade classroom a the Three Lakes School, to the Congregational Church basement,  to rooms in a Women’s Club member’s home next to the Black Forest.

The town as a whole was growing, and when the Three Lakes Civic Building (Community Building) was built to house the fire department, town offices, community hall/meeting room, and community kitchen, space was also developed specifically for the library. In November 1958 the library closed for one day as it moved into the new building, and became the Three Lakes Community Library, In 1961 as the Town of Three Lakes officially became the sponsor per state statute, solidifying its status as a municipal public library. It later joined the Wisconsin Valley Library Service in 1963 and books started being cataloged according to library standards.

With a burgeoning and successful Story Hour program that began in 1964 and lots of community interest, the library was quickly outgrowing the new space in the Civic Building. The Reflections on the Demmer Library at Three Lakes Wisconsin, by Mae E. Demmer, written in 1981, tells the next chapter of the story:

As the tenth anniversary of the library approaches, the Demmer family cannot help but feel a great satisfaction with its presence. The seed of inspiration was planted in a small article appearing in the Vilas County News in the spring of 1970. That article recited the extremely overcrowded conditions of what then constituted the Three Lakes [Community] library. A trip to the library, indeed, confirmed the need for expansion.

At about that time, the Edward U. Demmer Foundation, which my husband had established in 1963 in memory of his parents to benefit the citizens of Wisconsin, received substantial funding from Mr. Demmer’s estate. The trustees of the foundation were intent on finding an appropriate project which they could underwrite in memory of Mr. Demmer who had died the previous year. Inasmuch as we had summered in the Three Lakes area since the late 1930’s, it seemed an ideal location for funding a project which would be of benefit to the entire community. A library was considered by the trustees as a project of the permanence worthy of such a memorial.

With the assistance of the Town Board and Library Board and fine cooperation of the library staff, decisions were made and construction began. The following year, on August 22, 1971, the library was dedicated to the Town of Three Lakes.

Over the past ten years, the response to the library and the many activities which it provides the community has been tremendous. Interest in its growth and development has been supported by both full-time and seasonal residents.

The Demmer family and Demmer trustees look forward with both satisfaction and anticipation to the continuing significant role the library will play in enriching the lives of the residents of Three Lakes, Wisconsin.

For forty years the Demmer Library remained a center of community life in Three Lakes. As the years went on, the building began to show it’s age, and once again the community began to outgrow the two story, 10,000 square foot library. Library use has changed over the past 50 years, with the role of technology, the internet, and remote meetings and work beginning to find equal need with space for physical materials.

In 2009, the Demmer Library Building Committee (DLBC) was established to look at options for the physical space and future community needs. A surprise gift from the estate of Lawrence Demmer, son of Edward U. Demmer, was given to the Three Lakes Public Library Foundation, and became the seed that led to a $2.2 million building renovation and expansion completed in February 2019. This “Demmer 2.0,” built on the second Demmer legacy, now serves the community of Three Lakes and surrounding communities with 13,400 square feet, including: a dedicated children’s area, three study rooms, two large meeting rooms, a “Libratory” for creative interactive learning, and a Local History room that connects to the Three Lakes Historical Museum visitor center. The study rooms and meeting rooms are available to the public with a reservation, and the library provides meeting equipment to support meetings and presentations held at other locations in the community.